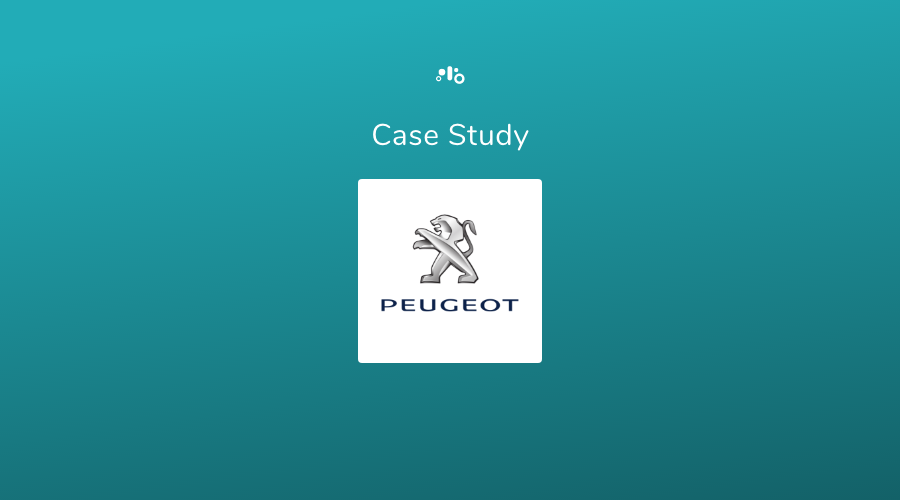 While Peugeot may be more than 200 years old, the brand and its marketing are cutting edge. Founded as a family-run grain mill in 1810, the company wrote some of the finest pages of automotive history with its innovative technologies and design.

As the brand keeps reinventing itself, it turned to influencer marketing and Influo for the 2019 Brussels Motor Show.

Didier Blokland, 360° Marketing Communication manager, talked to us about “unboring the future”, cars and influencers.

Peugeot is a well-known brand with a loyal customer base. What did you hope to achieve by turning to influencers and influencer marketing?

Didier: On the occasion of the Brussels Motor Show, we wanted to reach a different target audience than the audience we reach through more “traditional” advertising channels.

We wanted to reach a younger audience (18 to 24 year-olds) in a more spontaneous way and change the perception of the brand Peugeot. More concretely, we wanted younger people to make the connection between the brand Peugeot and design and technology.

Our main objective is to be the best premium mass constructor and be perceived as such. As younger people are not thinking about buying cars yet, they are the easiest group to start with to change the perception of our brand.

The Brussels Motor Show was the perfect opportunity for this, as we were presenting the new e-Legend concept car. The fully autonomous and electric coupé represents the Peugeot DNA perfectly: innovative and never boring.

Was it the first time Peugeot Belgium Luxembourg did influencer marketing?

Didier: It wasn’t. We already did a project with five influencers for the launch of the Peugeot 508. As that project was successful, we wanted to go bigger this time.

That’s why for the Motor Show, we decided to go for a larger number of influencers. Specifically, we wanted to work with micro-influencers as well as macro-influencers, with different types of audiences.

As that was too much to handle for the media agency we work with normally, we started looking for a partner who could facilitate the administration and hassle.

And that’s how you arrived at Influo. What did you think of the selection of influencers that are available on the Influo Platform?

Didier: We were looking for a partner with a database of influencers with many different types of profiles. That’s exactly what we found at Influo. There are many influencers available on the Influo platform, with different sizes of followings, in all types of niches, and age groups.

On top of that, you want to be sure you work with high-quality influencers. If you are contacting influencers you see on Instagram yourself, you have no way of knowing if they will be professional.

By working with a platform like Influo, you are sure the influencers are high-quality creators that are professional, have a good reputation, are perceived as credible and authentic by their audience and have good engagement.

Didier: For this campaign, we wanted to work with both macro- and micro-influencers. That way, we could experiment and learn which types of influencers are the best fit for Peugeot and where the opportunities lie.

More specifically, we were looking for influencers that have built credibility with their audience and that we can have a long-term relationship with. We prefer to work with long-term brand ambassadors rather than different influencers for every campaign.

But the proof of the pudding is in the eating when working with people: you can only know if the influencers you selected will meet your expectations once they have actually finished the project.

It’s hard to know on forehand if and how things will work out and what the results will be. You choose influencers based on an online profile. That’s very different from seeing how they work in reality.

I think the best way to find ambassadors for your brand that are a good fit, is by trial and error. Do one campaign with them and give them creative freedom. And then afterwards you evaluate and decide if they are a good match and you keep working with them.

**[🚗 GIVEAWAY 🚗]** Today I went to the opening of the “Brussels Motor Show” where I discovered the new @peugeotbelux E-Legend car. On the outside it has the charms of an old 504, but inside you can find the innovative features from Peugeot. And as they have the same vision as I am, I just had to share this with all of you! Boredom doesn’t exist in both of our DNA’s 🧬 and that’s exactly why they created their innovative features such as the i-Cockpit, which has a compact steer and a big touchscreen, but also with the autonomy that this car brings, you will experience driving in a complete different way. It makes the future of driving a lot less boring isn’t it? Time for you to discover it! I can give two of my followers the opportunity to win a duo ticket to the Brussels Motor Show 🎉 To enter this giveaway you have to: 1. Follow @cindyvandyck and @peugeotbelux 2. Tell us why you would like to win and tag the person you would like to bring with you 3. To increase your chance you can repost this picture and mention us in your IG stories Driving should never be boring, so make sure you experience their new “E-Legend” concept! The winners will be announced on the 21st of January ☘️ ______ #theafterworkblog #cindyvandyck #ad #unboringthefuture #peugeotsalon #brusselsmotorshow #belgianblogger #belgischeblogger #antwerpblogger #blogger_be #igersbelgium #bloggeusebelge #girlswholovecars #peugeotlovers #carsandgirls

The results of the campaign were pretty staggering: the campaign performed at an above-average engagement rate of 12.99% and a relatively low cost-per-engagement (CPE) of €0.07. How do you evaluate the campaign? Do you consider it a success?

Didier: We were very pleased with the results of the campaign. With this campaign, we wanted to achieve 4 main things:

The campaign achieved all of that and much more. The Peugeot brand was seen in a different light on social media and reached more than 1 million people. The influencers told stories about Peugeot, and that resulted in engagement rates that were much higher than expected. So we are definitely happy with the results.

For future campaigns, we are looking to use influencer marketing in an ever broader way. For example, we are looking at how we can integrate influencers and TV advertising: maybe we can have a long-term deal with an influencer who will be the face of the campaign on social media as well as on TV.

This was a Studio project, meaning that Influo managed the influencer campaign from beginning to end according to the seven-step Influo method. How would you evaluate the collaboration with Influo?

Didier: The collaboration went very smoothly. We were very happy with the campaign. As it was a big campaign, there were many influencers involved. Influo completely unburdened us and managed the whole campaign: from taking care of all the communication with the influencers to following up on the progress of the campaign and making sure influencers post the correct content on the agreed-upon time. Influo handled everything very professionally and made sure it was smooth sailing.

After the campaign was complete, I received a very complete and insightful report from Influo with all the results from the campaign and how they measured against our KPIs.

In summary, we will definitely work with Influo again.

Do you have any lessons learned or advice for other companies who are starting out with influencer marketing?

Didier: The one thing I underestimated is that influencer marketing takes time. I think you can achieve the best results if you get to know the influencers you are working with better and explain them your brand: take them on a tour in your factory, explain to them how your products are made, or in our case, show them around personally on the Motor Show.

By investing some time, the influencer can make a personal connection with you and the brand, and that will result in a better collaboration and much better content.

Appeal to a younger audience who doesn’t drive cars yet and is hard to reach through more “traditional” channels of advertising.

Enjoyed my visit at the car exposition in Brussels with @peugeotbelux getting to know the #E_Legend concept car as well as their other models. 👁 Got to see their innovative ideas and new features from up close and got inspired by the energy of the whole Peugeot team. Glad I was able to be a part of this! Enjoy your weekend guys ✌🏽 ➖➖➖ #Unboringthefuture #PeugeotSalon Ad#

Creating an Instagram Media Kit That Works: The Ultimate Guide (for 2019) How Bosch Worked with 57 Influencers to Promote New Products [Case Study]
Newsletter
Read the latest on Influencer Marketing and get inspired by our lessons learned. Subscribe
Categories
Stay in touch

By subscribing to our newsletter, you’ll never miss any relevant update from us, such as educational content from our Hub, or news from our community.

You can unsubscribe at any time, we only want what’s best for you.
We use cookies to ensure that we give you the best experience on our website. If you continue to use this site we will assume that you are happy with it.Ok