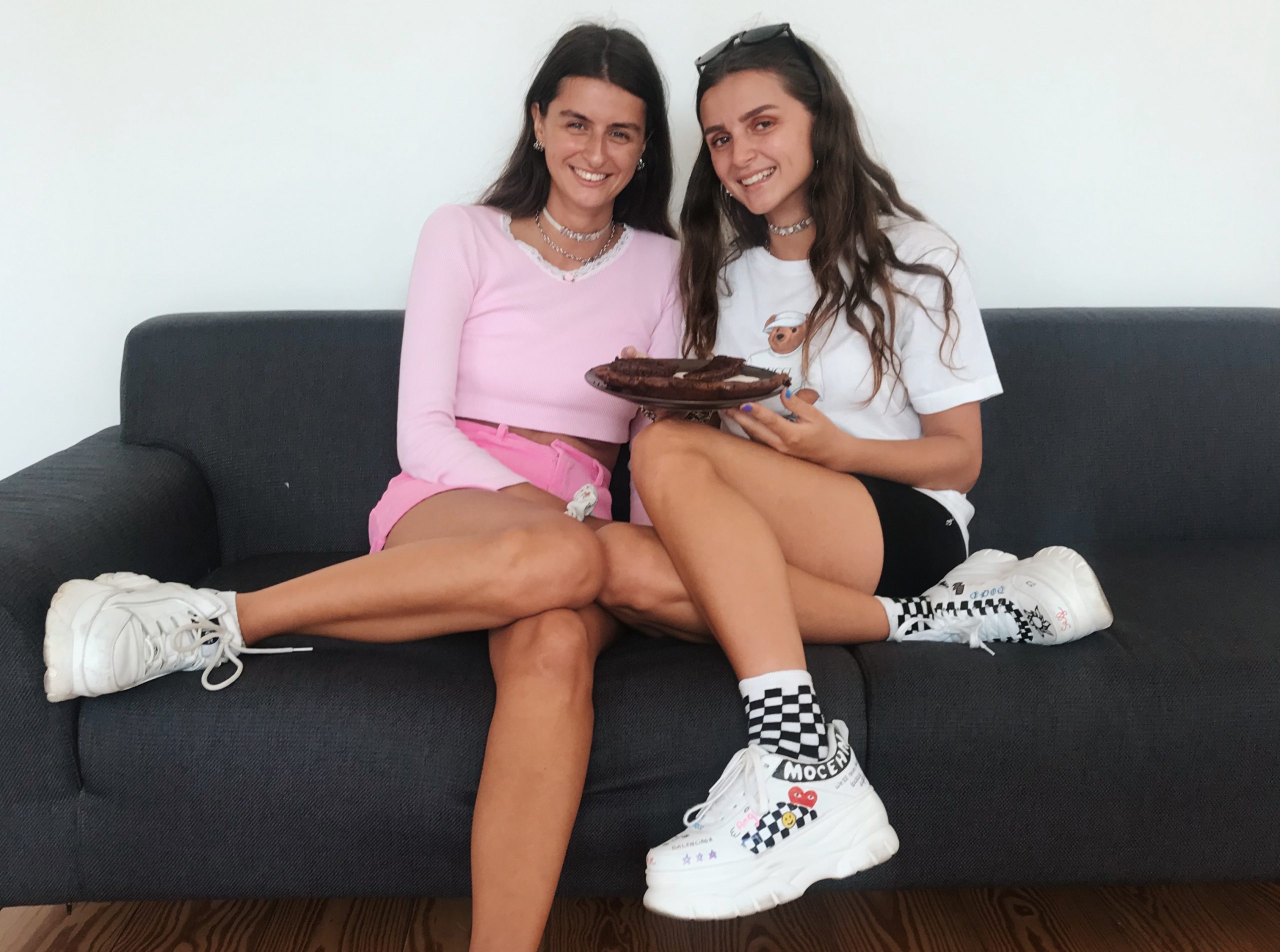 In the “Cake with” series, we chat over some cake, with influencers and creators about life and the influencer industry.

This time, we chat with creator-sisters Natacha and Melanie of @mocean__ on Thai bathing suits, the challenges of being an influencer duo, and their secrets on how they grew @mocean__ so quickly.

First things first, of course: what is their favorite kind of cake? “Chocolate cake,” they respond in glorious unison. “That was an easy one!”

How would you describe what you do to a stranger?

Natacha: “We’re just ordinary students.” (laughs) It’s a bit awkward to introduce yourself as an influencer.

Melanie: I usually say I’m pretty active on Instagram, and then they often ask me what my handle is.

What does a typical day in your life look like?

Natacha: Sleeping in, I would love to say. (laughs) But usually, we have to get up pretty early to figure out what we are going to do that day, what to wear, or where we are going to go.

Natacha: I recently checked, and I was at 35 hours per week, so quite a lot!

Melanie: Besides browsing and discovering new accounts to fuel our inspiration, we spend a lot of time replying to comments
and DMs. If our followers take the time to leave a comment or DM, it’s only reasonable we return the favor and reply.

The amount of DMs we receive depends on the type of post and whether or not we posted something recently. We easily get 50 DMs a day.

Melanie: Before @mocean__, I didn’t use Instagram much. I remember we were sharing pictures of the both of us once in a while on our personal accounts, so the idea to create a shared account came naturally.

Natacha: That must’ve been two and a half years ago now. We decided everything on a bus ride: let’s buy a tripod, let’s share an account, and by the end of the ride we already had our name. (laughing)

Natacha: The handle @mocean was already taken, so we had to be creative and pick a variation on it. I think the first one we used was @M.ocean, but nobody knew how to find us or how to pronounce it. So we changed it to @mocean__.

Natacha: Our community consists of mostly girls. A lot of them are around our age (16-24 years old), and we have followers from all over the world.

What’s the secret mocean sauce? How does your account grow so fast?

Melanie: I’ve learned it’s best not to try too hard when it comes to building a following. Sooner or later, you have to let go and let it grow organically. In the beginning, it helps a lot to comment and repost. But at some point, it all becomes too much. Now we just do what we want to do.

As soon as you reach a certain number of followers – let’s say 20,000 followers – the threshold for new people to follow you becomes much lower. I think people kind of assume that you’re a decent creator because you have a big community.

Now we are often reposted, or featured on the discover page. But, honestly, that’s all just luck. We have no strategies to make that happen (both laugh).

Natacha: We are just so lucky to have gotten where we are. We never thought we would have such a big and fantastic community!

Do you meet up in real life with your community?

Natacha: We try to engage on a personal level, though we usually don’t meet with our followers. Unless, of course, we get recognized on the street. Then we always make time for a chat.

Melanie: We were asked a couple of times to do a meet and greet. To be honest, we’ve never dared to organize one. I feel only two people would show up. (laughs)

I wouldn’t necessarily show up at a meet and greet of the people I follow, so I guess I expect the same sort of behavior from our community.

The one missing these crazy sunsets ?

How did you learn how to pose for pictures?

Natacha: We used to copy the poses of photos we liked. By now, we’ve had a lot of training, and it has started to come naturally, so we just do our own thing.

Melanie: A lot of our process is just based on pure gut feeling and luck, though. Often something silly like putting your hair a certain way will suddenly give us an idea. And then we build on it until we have a great photo.

Natacha: We’re both not easily satisfied, so that means we shoot A LOT of pictures. As we are two, photos have to get approved by both of us, which makes it even harder!

We often shoot 600 photos or more for one post. The worst part is that I don’t like deleting pictures, so my phone is filled with thousands of unused photos. I think there are more than 53,000 pictures on my phone. That’s madness! (laughing)

What gear do you use?

Melanie: We want our photos to be as low key as possible. We like that our pictures look like anyone could have taken the photo.

Natacha: Our set up is super simple. We use an iPhone and a compact tripod. That’s it! It makes it very easy to travel or go places with public transport.

Tell us about your hashtag game.

Natacha: Hashtags are important! We always put some in a comment. Tagging also makes a difference, so we often tag people in our posts and stories.

Melanie: We tried different hashtags until we had some that worked well. Right now, we have three hashtags we use consistently.

Melanie: I remember! We only had 700 followers or something. One day, we got an email from a brand asking if they could send some free clothing.

At the time, that was an incredible feeling, and of course, we agreed. Looking back now, I wouldn’t do it again, though.

Natacha: My favorite collaboration was with a bathing suit company from Thailand. We were still very small – we only had around 2,000 followers. They reached out to us because they loved our content. Now that I think about it, that’s kind of crazy. We were still so small, and we were the only European account they worked with as they usually don’t work with European accounts.

It just goes to show that you can have cool brand collaborations, even when your account is still small. Follower numbers don’t matter. It’s about your content.

In the beginning, we DMed a lot of brands we liked and asked if they wanted to collaborate. And some brands said yes! We noticed it was much easier to get smaller brands to collaborate with us than bigger brands, though.

Now, brands reach out to us most of the time.

What are your biggest struggles as influencers?

Melanie: I find the Instagram algorithm frustrating. It changes all the time, and it has a big impact on the number of views and likes our content gets.

Natacha: When we do brand collaborations, I sometimes feel we are being taken advantage of. We still have a lot to learn, and it’s hard to tell if brands are compensating us fairly.

Melanie: Right now, we earn a decent amount of extra money, but it won’t make us millionaires either. As we are a duo, we need to split all our earnings. Brands understand our fee is a bit higher than what one person would ask, but we certainly don’t get paid double.

Natacha: Scheduling can also be hard. Sometimes products arrive late, which means there are only two days left to produce the content instead of the foreseen two weeks. Some brands still expect you to respect the deadline, though, and that can be hard. As we are two, we need both of our agendas to be free!

Where do you see yourselves in five years career-wise?

Melanie: We would like to create our own fashion and shoe label.

Natacha: Yes! And even though we are not fashion designers, we would love to be involved in the whole process of making the pieces. We want it to be more than just a piece of clothing with our logo on it.

Cake with: Nanja Massy Cake with: Lars and Timo
Newsletter
Read the latest on Influencer Marketing and get inspired by our lessons learned. Subscribe
Categories
Stay in touch

By subscribing to our newsletter, you’ll never miss any relevant update from us, such as educational content from our Hub, or news from our community.

You can unsubscribe at any time, we only want what’s best for you.
We use cookies to ensure that we give you the best experience on our website. If you continue to use this site we will assume that you are happy with it.Ok